The Haunted Secrets of The University of Cambridge

The University of Cambridge is considered to be one of the most haunted universities in the world. Its creation dates back to 1209, and of course, thousands of creepy happenings have occurred since, which we’ll share with you in this blog post.

A bit of background

As recently as 1997 Peterhouse, the oldest College in Cambridge performed an exorcism, involving all 48 college fellows, in an attempt to drive out the spirit of an 18th-century Bursar rumoured to be haunting the Combination room. The Bursar had committed suicide after blaming himself for the election of a highly controversial college master.

Two of the most prominent paranormal research groups in the century were founded at Cambridge, and in 2010, the University was described as ‘the most haunted University in the world’ by the Society for Psychical Research.

The founding of Cambridge Uni itself is story steeped violence and murder. Several Oxford scholars at the time had been accused of killing a young girl in the city and fled to Cambridge in order to escape justice at the hands of the mob. Not all of them got away and two were hanged by townsfolk. So right from the word go Cambridge has been Cain to Oxford’s Abel.

Now, let us share three stories with you from Magdalene, Trinity and Queens’ College.

Magdalene, like many of the Colleges here has a suitably dark history. Two of its patrons, the Lord of Buckingham and the Duke of Norfolk, came to sticky ends after being accused of treason.
It was founded originally as a hostel for Benedictine monks, but those monks would have been driven out after the dissolution of the monasteries in England. To really add insult to injury the man who took over and refunded the College here was Thomas Audley, who helped orchestrate the dissolution along with Henry VIII, and profited handsomely for it.

Audley was an incredibly unpopular man with a great deal of blood on his hands. He assisted in the arrest and execution of several of the king’s enemies (including John Fisher of St John’s College) and dealt ruthlessly with his rivals in court. He was so unpopular that when he finally died, he was buried beneath a black tombstone that read ‘this stone is neither cold, nor so dark, nor so hard as the heart of the man that lies beneath’.

The Fellow’s Gardens of the College are a site of multiple ‘sightings’ and reports of unusual activity and was investigated by paranormal researcher Alan Murdie. He says that he interviewed a student of Maori descent at the collage who claims that unusual activity centres around a specific tree in the grounds.

It’s not uncommon for students and fellows of the college to see what looks like a fast-moving figure shooting through the gardens around the area that the monk’s hostel used to be situated. Since the figure isn’t making any noise, they assume that it must be on the other side of the river, but closer investigation always finds the broad walk empty. The gardens here can only be accessed by means of locked gates, so it should be fairly difficult for a figure to exit the gardens unnoticed. But further investigation rarely fins anybody…

Trinity College was the birthplace of both the Society for Psychical Research and the Ghost Club, the two oldest such societies in the world. Interestingly membership of the Ghost Club isn’t just for life, but also continues into the afterlife, and once you’ve joined you are considered a member for eternity… which is a pretty good value for money.

Trinity was also the Alma Mater of TC Lethbridge, the paranormal researcher who took an interest in ghosts, magic, UFOs and all things strange. He was also a keen excavator of cemeteries. He worked at the college for a long time but ultimately left Trinity after he felt that they no longer took his theories seriously. His interest in the paranormal had started right here at the college itself. He was leaving his accommodation one evening, and in the main living room, he saw his friend sitting by the fire and a porter, wearing a large top hat and fox hunting clothes.  The porters at Trinity would traditionally wear top hats on a Sunday, so he thought nothing of this. He said ‘goodnight’ and noticed that only his friend replied, the porter just scowling.

It was only upon mentioning this to his friend later on, that he discovered the man was certain he had been the only person in the room and never seen the porter. Lethbridge than realised that the day was Monday, none of the porters should have been wearing top hats.

Queens’ College was founded initially by King Henry VI’s wife, Margaret of Anjou. She survived her defeat in the Wars of Roses and lived in exile in France, where she died. Her remains, however, were disinterred during the French Revolution and nobody knows her resting place today.

There’s only one famous ghost at Queens’, that is found in the President’s Lodge, which is the oldest building on the river, and not much of it remains today. In the oldest part of the building, it’s said you can still hear a piano playing late at night. The College has never attempted to drive out the ghost because everyone who has heard the spirit confirms that it plays passably well.

We hope you enjoyed this blog post. Happy Halloween, everybody! 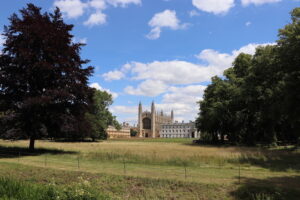 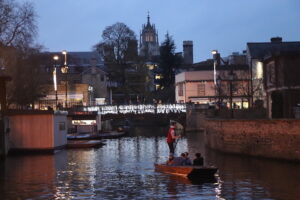