Magdalene Bridge isn’t at all a popular bridge among the others along the River Cam. Although it is a very important one, it has marked the history of this city. Besides being able to be crossed Magdalene Bridge walking, by car, bicycle or any other public transport; this bridge has a very interesting and details architecture underneath it, worth to take a close look at.

To be honest, the best way to soak up the details and the history in which this bridge stands tall, a punting tour along the River Cam is the most recommended experience. Punting is a unique and truly rewarding way to spend your time around Cambridge, by popular demand. Moreover, Magdalene Bridge is the very first one to see when punting from our end of the river to the other end and back.

Details from the past

Dating back from the Roman times, this one the only entrance into the city. Known, at the time as Cam Bridge. Therefore, from its very early days, this Bridge has been crucial for trading and sustainability of the city. It is believed that this bridge to come into the city, gave the city the name of Cambridge. For instance, the name of the city was officiated upon the River that crossed the city: River Cam.

Since the Roman times and throughout the following centuries this site has been a crucial link between East Anglia and London. Once all routes had to converge on this crossing point. Although this bridge hasn’t always looked like we can see today. In fact, the first models of this site were constructed using wood, up until 1754, the year when this bridge was finally constructed using stone. Although it has been rebuilt twice already since that. Firstly in 1823 by Arthur Browne as the very first cast-iron bridge. Secondly by Browne’s in 1982, which remains the exact design we can see nowadays.

The Bridge was later on named of Magdalene Bridge, due to the proximities to the foundations of Magdalene College. An interesting fact about the pronunciation of this name is that it is actually pronounced as ‘maudlin bridge’. This logical change of names brought other historical facts to this bridge. Associating the bridge to the stories of the college itself and Cambridge University.

For instances, some of the most outstanding facts of the history of this college are associated with the fact that it was the first college to accept Jewish and Asian students. Besides, being the last college to accept women to study, in 1988. (In fact, the final college to do so) And to aggravate this story, it is said that the male students put their college flag half-mast, came in wearing black armbands, marched through town with a coffin and staged a funeral for education to show how upset they were to accept women studying between them. Although the women did prove them wrong, they raised the grade average here by 15% and the only Nobel prize winners to have attended Magdalene have all been women.

Highlights of this Bridge

However, these stories didn’t hide away the main reasons why is this bridge so notable for! It will always be known as one of the first sites of crossing the river Cam from one riverbank to the other. And by its vital role within the survival of the city due to its’ important trade route.

Nevertheless, there’s something unique about this bridge. Due to be so close to the River and to be so long. This is one of the only Bridges along the Colleges Backs that has handy ridges underneath it to help punter, push themselves along the Cam whilst punting. Still curious about this site? Or willing to know more about the history of Cambridge? Join us on a punting tour!

What is Christmas without our favourite Christmas traditions? And this year we were delighted to... 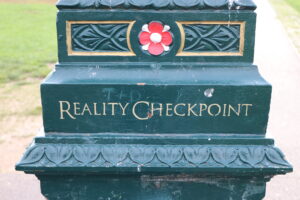 Dinky Doors aim is to ‘save the world’ one smile at a time. They aim...